I don’t mind sharing. Mostly. Yet schnauzer space is sometimes too good to surrender. I mean, here I am after a hard day.
I had to bark at numerous cyclists. I had to make a full circuit of the park. I eventually found that tennis ball I lost ages ago.
That is as well as keeping the humans entertained. They need me to look up balefully at them at regular intervals, just so they know that do, really, really do want a piece of their toast, or biscuit or burger or whatever. I’m not a fussy eater.
They also need me to tug on their trouser legs when they are going downstairs as otherwise the descent would be too rapid. They need me to hunt out discarded shoes, making sweeps of the area as often as I can as those shoes can hide very well and are quite sneaky about this.
So, I do all this and all I ask is to catch forty winks uninterrupted and what happens? They want to share the couch space. All of the floor space that’s empty, all of those tall chairs I never bother to sit on and they want to muscle in on my couch to watch the square thing in the corner.
Well, paws off. 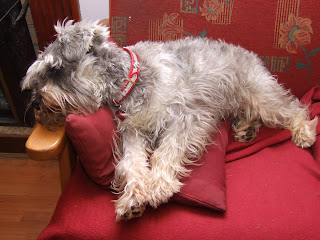 Posted by Isaac the wonder schnauzer at 9:42 AM 7 comments:

The Return of the Schnauzer

Deep question to ask. Why is it when humans are busy, it’s the schnauzer who suffers? Well, suffer might be too strong a word. But losing my surfing time is a big deal. I have fans, you know!
So I have been unable to write for a while and it’s all because Mum has been hectic with work. So do I get a sniff of the laptop? No.
And it’s not like I haven’t been busy. I have had birds to chase out of the garden, a long term that I remain utterly committed to.
I have managed to demolish a dread enemy, a feat that brought great sobs from my grateful Dad. That running shoe must have been as much of a pain to him as it was to me, because after I had made smithereens of it, all he could say was “Isaac I don’t believe it. I don’t believe it”. Never underestimate the schnauzer, I thought.
I visited my neighbour a few times. I feel this is an important exercise. She has recently acquired a new friend, a fiesty little terrier names Sasha. I have to closely monitor this situation so that Sasha knows that the real love of her new owner’s life is me. Always was and always will be. She can just live there but I remain the king of hearts.
So, it’s been busy for me too and it’s good to be back! 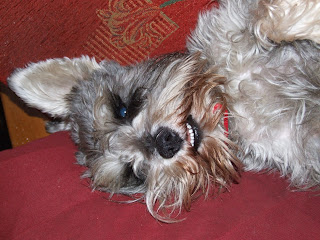 Posted by Isaac the wonder schnauzer at 9:37 AM 5 comments:

I have discovered something too good to keep to myself. I just have to get this out. I have the power of flight.

Yes, airborne, paws off the ground,  flight. I didn't have to grow feathers. And I don't have to live in trees like those pesky birds.

But I can fly. It's hard work, you have to be pretty fit and need a good clear run, no trees to get in the way or humans throwing frisbees or balls for you. Next thing you know it's up, up and away.

To date I haven't managed to soar to great heights but I am happy to report that I have mastered the basic principles.

The sky is the limit! 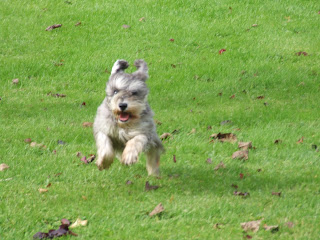 Posted by Isaac the wonder schnauzer at 4:33 AM 4 comments:

There are all kinds of friends out there. New friends I haven't met yet but have barked at by way of a preliminary introduction. Friends who are always good for a game of chase. Human friends who think the finest thing to do in the world (and correctly so) is to rub my coat, tickle my tummy or feed me treats.

Then there are the other kind of friends. The inanimate ones. They squeak, they never mind you chewing them, they roll around so you can chase them and they don't mind when the humans toss them because of course, I will always retrieve them.

Unlike human friends, these ones never want to go off and sleep, watch the square box, go to work and leave me waiting on them, yes there is a lot to be said for faithful friends.

Now if only they wouldn't fall apart just when you start to get used to them, they'd be downright perfect. 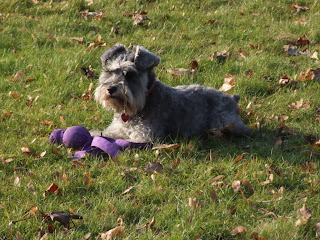 Posted by Isaac the wonder schnauzer at 10:42 AM 4 comments:


Have you ever had a good idea that turned out to be not such a good idea when you put it into action?
Well, that is what happened to me this week. Inspiration struck and then something else struck and the upshot of it all is that I have a skinned nose that is quite stingy.
To make matters worse, Mum keeps dabbing cream on me which would be fine if I could lick it off but I can’t because it tastes awful. Also, I don’t know why she is so keen to put cream on the one place where I am sore. Rub my tummy, stroke my fur but leave the nose alone, please.
My misfortune began with a delicious aroma of basted meat and juicy gravy. I, of course followed this tempting scent to the source.
Which was a booby trap. Mum said it was an old tin can but I know better. It was a fanged monster that mauled and savaged my poor nose and disfigured my schnauzery good looks for who knows how long. I wouldn’t mind but I’ve just had my fur done.
I was lucky to get out of there alive. It grabbed on to me with its jaws of death, trying to suck me in whole, I am certain. You should have seen me pit my wits against the beast. It took all of my strength and cunning to emerge victorious.
I did not escape unscathed and have my battle scars to show for being a courageous warrior and defeating the metal brute.
I am a mighty schnauzer and I took it on the nose. 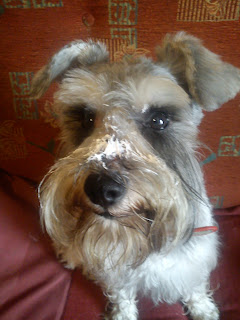 Posted by Isaac the wonder schnauzer at 4:57 AM 4 comments:

Catch me if you can


There is a lot to be said for keeping active. And I get around. If I’m not chasing a ball, I am running up and down the stairs to make sure that each of them are still where I left them.
I spend a lot of time stalking the neighbour’s cat. Even after she hisses at me and swats me with her paw. Mum says I never learn but watching that cat is an education. If the neighbour only knew what happened to that wren that used to avail of her bird bath, we’d see who’d be in favour then!
Yes, I’m busy busy, hardly time to catch my breath. You won’t catch me resting on my laurels.
Hey what are you doing with the clicking thing? 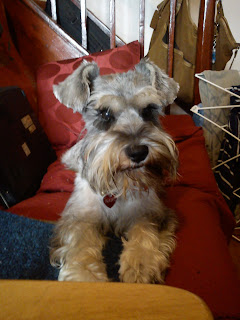 Posted by Isaac the wonder schnauzer at 7:14 AM 2 comments:

My poor humans have to go to a lot of effort to compensate for all the things they don’t have that we dogs take for granted.
It takes lots of words for them to communicate what we can get across with just one wag of the tail.
They have to pile on clothes in the winter just to keep warm, poor things, we just give our coats a shake and we’re ready for the snow!
However, the greatest lengths humans go to just to match our canine cleverness is in seeking directions. They go on a journey and they need books of maps. Many stops to ask directions from random strangers and of course the little speaking invisible woman in the car.
She speaks to them from behind a screen, saying thing like take the next left and go straight for 10 kilometres. All gobbledegook to me. And to my humans too, it seems because that device has never yet brought us to where we intended to be.
All of these books and gadgets are to make up for the fact that the humans don’t know how to follow their noses. We have a built in guidance system that never fails.
Just follow me. 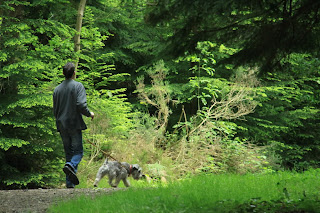 Posted by Isaac the wonder schnauzer at 8:46 AM 3 comments:

Isaac the wonder schnauzer
I am a friendly, and if I do say so myself, dashingly cute miniature schnauzer. I have plenty to say, in other words I like to bark but I ooze charm. Oozing charm is ok, right? Don't have to go to the vet for that, right?